In many picture book challenges, we are encouraged to use books that have been published in the last five to ten years. However, being the classic picture book nut that I am, I just had to get in a couple of the older stories. Here is one of my favorites. 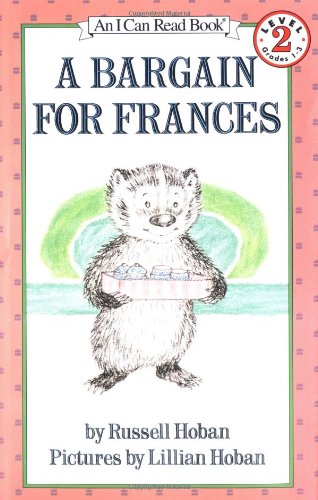 Title: A Bargain for Frances

“It was a fine summer day, and after breakfast Frances said, “I am going to play with Thelma.”

Frances is a little badger. The last few times she played with Thelma, her friend took advantage of her. This time, they are going to play tea party. Frances has been saving for a special china tea set. When Thelma hears about that, she persuades Frances to buy her old plastic tea set. Frances doesn’t want to until Thelma convinces her that no one wants a china tea set and plastic is better.

Frances shows her sister the new old plastic tea set and her sister thinks she has been foolish. The more Frances thinks about it, the more she agrees. When she sees Thelma buying the china tea set with the money she had given her, Frances knows she has to be clever if she wants to trade the old plastic set back to Thelma.

I won’t spoil the story for you…if you haven’t read it, you really should…and then read it to any young children you know. It is a wonderful story about friendship and ingenuity.

CONFLICT: There is a lot of conflict in this story – Frances is saving her money: should she continue saving it for a tea set they might be all out of or should she spend it on something she can have now? Should she trust her friend, Thelma or trust her mom and sister? Should she turn the tables on Thelma to get the china set she wants or should she keep the plastic set she really doesn’t want?

I especially love the part near the end.

“Well,” said Thelma,”from now on I will have to be careful when I play with you.”

The story is also strong on plot and character…Frances is the star of several other books by the Hobans. And they also use rhyme and word play…in every book, Frances makes up rhyming songs to sing.

If you’d like to see some of the other books in the PB 14:14 Challenge today, please click on this link: http://christiewrightwild.blogspot.com/2015/02/day-10-mostly-monsterly-by-tammi-sauer.html